Before and After - Sunday 27th March

It was 4 weeks on Friday since we got back and I'm not sure whether it has flown by, or feels like a lifetime ago. A bit of both really.

We are trying our best to make weekends a combination of rest for Ev and spending quality time together. This is definitely required after the week's activity which, on top of the normal schedule of kid's clubs, school runs, nursery pick-ups and coming and going to work, now includes extra trips to PT. This week it was Monday, Wednesday and Friday - and unfortunately most of the "to-ing and fro-ing" falls upon Loup's shoulders.

Not that we are complaining, we knew it would be like this and we are more than happy to have signed up for it ~ made much easier by Ev's attitude and all of the help and support that we continue to receive. However, we are constantly blown away by Ev's drive and determination. Take this evening for example - having done a bit on the treadmill (even though we were happy for him to take it easy) he wanted to do some more. In total he has done about 24 minutes today on the treadmill !

Yesterday we had a visit from Robin Carter who is also on his own journey towards St Louis. We did our best to offer some advice and support, and will hopefully be able to help out as much as we can - however, as we talked it was really interesting to note how much progress Evan has made since his return. One great example of this is that he is nearly in a position to move down from his initial set of splints to the newer, smaller, set. Which he can do somewhere around 6-8 weeks after his second op - next week is week 7, and it depends on how strong he is getting. This will be a massive change, which you can see from the photo below. 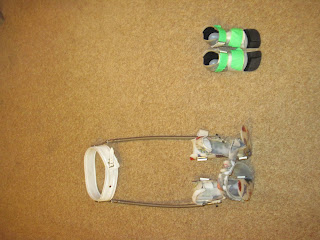 The piece of medical equipment on the left is the twister brace which he wore all day, every day, and which rotated his left foot outwards so that it fought against the muscle rotation and brought things back in line. The other pieces of equipment, almost tiny by comparison, are the "new splints" which he will soon move into. Even without all of the "he'll be walking soon" stuff, this makes such a difference to him, and when you explain to someone what he used to have to put up with, makes you feel quite guilty that we didn't do this sooner.

Another example is that we were only recently told that "pre-Op" Ev would have been in constant pain ~ as his body wouldn't do what he was telling his brain to tell it to do, this would cause him some pain. Perhaps like toothache or a headache - but just think what it's like when you haven't been feeling well and then you recover. As a result, he should be thinking "clearer" - as he can actually concentrate fully on things. Quite heartbreaking in many ways, but proof that the "after" is way better than the "before"....
Posted by Andrew at 21:16 No comments:

When we were in St Louis it was relatively easy to know what to write in the blog. Even though it was written daily there was something new to report each time. Since we have got back, things have levelled out and we are on a steady, but slow, slope and sometimes it feels like there is nothing "new" to report.

Yes, the treadmill is coming tomorrow - which will give us chance to increase Evan's stamina and get those miles under his belt.

...and yes, Ev continues to do really well at school and we are really proud with him - he just doesn't seem to have dipped since his journey. However, I mentioned that before.

...and he is also doing really well with his PT sessions and continues to improve each day. Again, not really "news"...

So, I was contemplating a fairly general update with a couple of photos of him doing his standing unaided, which he is getting better and better at. Then I came home tonight and was greeted by Loup and the kids, giddy as kippers. This is why....

I think it's safe to say we are pretty much settled back in now - Evan continues to amaze at school as well as with his PT. At school, it seems as if he has never been away, which is really good seeing as he has missed the best part of a half-term - was obviously something we were worried about. However, he has also been doing in excess of 2 hours physical work each day, whether it be the stretches that we have to do, the extra walking that we are trying to get him to do or the PT sessions that he has. He also continues to stand for longer and longer ~ his current record is 4 minutes 32 seconds point 4 (he hastens to add). Ev is very proud of this.

That said, Ev is only human and so we make sure he has a full day chilling out (or a "pyjama day" to him). Which this week is today. He is currently sat watching the Australian version of Total Wipeout, which I spotted was on Watch last night. A bit more "strewth" than "ooph", but essentially exactly the same.

He wasnt entirely happy that I interrupted his pyjama day for us to pop out. We need to get a treadmill at home, so that he can get those miles under his belt. I sweetened the deal with a trip to McD's on the way, and im glad we did sort it out. We managed to get a good quality refurbed one for a little bit less than we expected to pay, and we might even get it delivered next week. It was also the first time we had been out together since STL, which was really good. I've made sure that I've spent lots of time with Maya and Sam over the last couple of weeks, so it was nice to have some time with my "big journey buddy".

In contrast to STL, where there was seemingly massive progress on a daily (if not hourly) basis, it has been steadier since we got back. Clearly, this was always going to be the case - but it's good to have an "event" to look forward to - and the arrival of the treadmill in the next week or so will definitely be that. Not least because it means we will have to sort out the back room so we have somewhere to put it. Which has meant collecting all of the various Evan's Big Journey "stuff" together to put in the loft. For "The Simpson" fans, I kind of feel like Homer Simpson with a big box of Be Sharps stuff.

I guess in years to come, we will dig it all out from time-to-time and look through it, and we have enough wristbands left to last us for the rest of our lives (not to mention a couple of boxful of Christmas cards - which you are all getting next year...). It could have been easy to dwell on what has happened over the last 9 months, but we owe it to everyone who has helped out, we owe it to ourselves and most of all we owe it to Evan to make the most of the future. The future starts now....
Posted by Andrew at 16:35 No comments:

It's been a week since we got back - in some respects a normal week, but in other respects a very different week.

In the last post I talked about our "first steps" back in England - and they were actually captured on camera....


I think we have done pretty well in avoiding jetlag - although Ev did sleep from 6pm Fri to midday on Sat - and only once was I wide awake at 2am in the morning (Monday). On Saturday we had a number of visitors to see Ev and on Sunday Ev's teacher, Mrs Oswald, came to see him. Then, as usually happens, it was Monday morning. No avoiding it. We were able to take Ev into school early and get him sorted out, which helped a little bit - as nice as it would have been to see people, it might have been a bit much for him. Although, perhaps not. Every challenge that we have thrown at him, has been batted back over our heads (maybe not the best week to use a cricket analogy...). In the end, he has done a full week (we thought he might need to be phased back in) without seeming too tired and everyone at school is really pleased with him.

On Monday we also met with Ev's PTs; Emily and Steve. They were both really impressed with his progress and we know he is in good hands for this next part of the journey.

As for Ev - he is still extending his "record bests" - when we came back from St Louis he could stand, balanced and unaided, for about 2 - 3 seconds. Which was better than the 0.01 seconds he could do before the op. He needs to do this, as it's a building block to being able to walk, and he can now do 90 seconds - yes, NINETY seconds. You can see him moving and wiggling, adjusting his hips and upper body to remain standing and always, always with a big grin on his face. 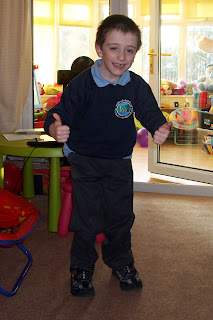 Other than that we have both been settling back in - although we both miss STL a little bit. It's definitely a case of mixed feelings - we are SO glad to be back home, but you kind of get used to the routine and the safety and we had this "guys on tour" thing going - which I suspect was actually probably more like Morecambe & Wise (sharing a double bed in our PJs) than Jagger & Richards. As much as it was difficult to be separated from Loup, Maya and Sam, it was an opportunity that most people wont get - so much one-to-one time with a child, free from having to do the housework and going to work or school. We had fun.

So, back to normal, but not quite. It's a different kind of normal.
Posted by Andrew at 20:22 No comments: